Innovation in the Wimmera

Emmetts is now selling the Tornado Harvester Airflow System to reduce the risk of harvester fires, and reduce downtime at harvest.

Horsham Hydraulics is embedded in broadacre cropping, and has been for the past 23 years. With a team of seventeen people employed and located in Horsham Victoria, Horsham Hydraulics started back in 1994 selling and repairing hydraulics. Always looking for innovative ways to help farmers, they have since expanded into sprayer tank extensions in 2012, and now the Tornado Harvester Airflow System in 2016

The problem – spot fires on the header

The Idea for the Tornado was generated by a customer, who brought his problem to Horsham Hydraulic to help find a solution. The problem is one experienced by many farmers across Australia during harvest. He kept lighting fires because of the dust and heat being generated from the harvester. To avoid the fires that were spontaneously occurring, he had to stop harvesting every 30 minutes to blow down the harvester which became increasingly frustrating and time consuming.

When the customer approached Horsham Hydraulics, they quickly put together a system to blow the dust from the machine, while the harvester was operating. This reduced the need to stop and blow down the harvester, therefor, increasing the acres covered per hour and helped solve the customer’s problem for the remainder of the 2016 harvest. With the news travelling through the community, other farmers in the area ordered the same system. In the first year, Horsham Hydraulics installed the Tornado fan system on five harvesters and the feedback was very positive.

Operations and consideration in design of the Tornado

Over the year Horsham Hydraulics worked on further refinements to the design and began production and installation for the 2017 harvest.

With the second design iteration, research and development was conducted and resulted in a new hydraulic circuit on the Tornado using only 8 Hp from the harvester and the existing hydraulics, which insured that the speed and capacity of the harvester was not negatively impacted. The air hose was tested extensively to ensure it could maintain its structural integrity in the extreme heat of operation.

The Tornado has its own monitors as well as John Deere specific mounting brackets which eliminate the need to add extra mounting points.

Reaction of farmers to this innovation and Emmetts involvement

Word of mouth has spread with the help of television news coverage, articles in agriculture papers, social media and satisfied customers. With this, Horsham Hydraulics has changed their business practice to set up dealers across Australia who will sell and install the Tornado Harvester Airflow systems. Emmetts is the first dealer group appointed, and every branch will be able to sell and install the Tornado system. Emmetts is pleased to be the first dealer to be set up as a distributor within Australia.

This is a great example of two local businesses teaming up to support farming innovation.

Horsham Hydraulics, manufacturers of the Tornado, is a family business which is run by bothers Richard and Eddy Nagorcka, their father Brian is also still involved. The family were originally farmers in Hamilton, Victoria, prior to buying Horsham Hydraulics in 1994. Horsham Hydraulics, much like Emmetts, sponsor a huge range of local sporting clubs and events within the farming community. They also employ apprentices, providing them with engineering or fitting and turning qualifications. 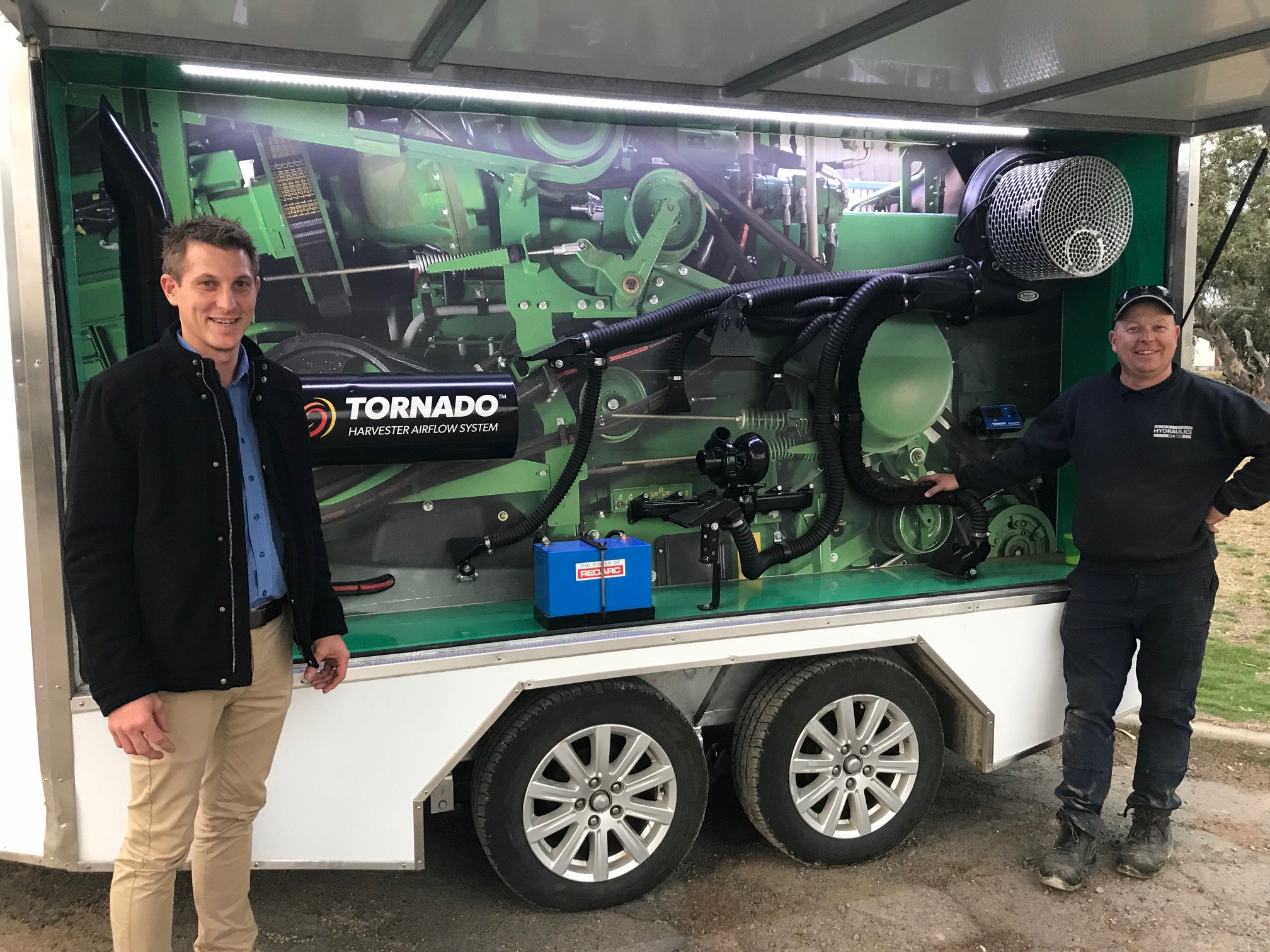 Watch the WIN news report on the Tornado system here.