On the banks of a river, our food grows 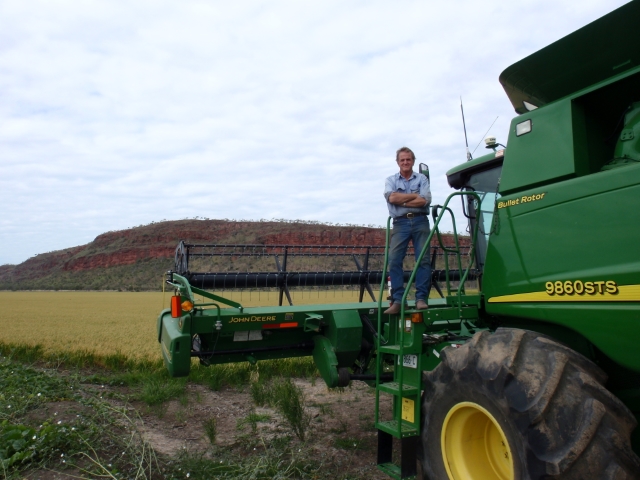 An interview with Laurie Arthur

Photo: Growing rice crops on the Ord River in the Kimberleys (2010).

Laurie Arthur and wife Deborah reside on their picturesque farm 50km north of Swan Hill. Their house sits on the bank of the Edward River, a river which an entire industry depends on.

The path to farming

Laurie and his family are rice, grain and lamb producers. They have been on the land since 1980, when Laurie and his brother Neil decided to leave Melbourne to become farmers. As children they would visit the area around Swan Hill where they enjoyed the space and the interaction with animals like horses. The brothers acquired land over the years by purchasing run down irrigation farms and renovating them. “We would knock down old contour irrigation and then reform it all as whole-farm, lasered, gravity irrigation,” Laurie recalls.

The rice industry and water allocation

A passionate irrigator, Laurie is also the Chairman of SunRice and is an active advocate of equitable water reform across Australia. “Annual cropping is under siege in Australia at $700 per megalitre as a temporary water price,” Laurie said. “It is not just rice under threat, but Australia’s cotton, corn and annual horticulture production.”

“Australian governments now hold 28% of water entitlements in the Murray Darling Basin and delivering much of this water downstream is now proving to be problematic. The enormous variability of Australian rivers imposes a limit on the number of permanent plantings that can be sustained during extended droughts. Irrigation communities are now struggling with this issue and Governments appear to be at a loss as to what to do about it.”

“Growers are investing heavily in permanent plantings like almond and fruit trees without knowing what each year will provide in water allocation. I think all irrigation farmers would agree that a balance between annual and permanent irrigation enterprises is important. During the millennium drought, allocation prices peaked at $1,100 per megalitre and this had a severe impact on many irrigation districts.”

“With the onset of COVID-19, food security is now an issue in Australia, just as it is in the rest of the world. The water reform process that began with the National Water Initiative in 2004 will need a revamp to address these security issues to enable irrigation farmers to confidently build their businesses into the future”. 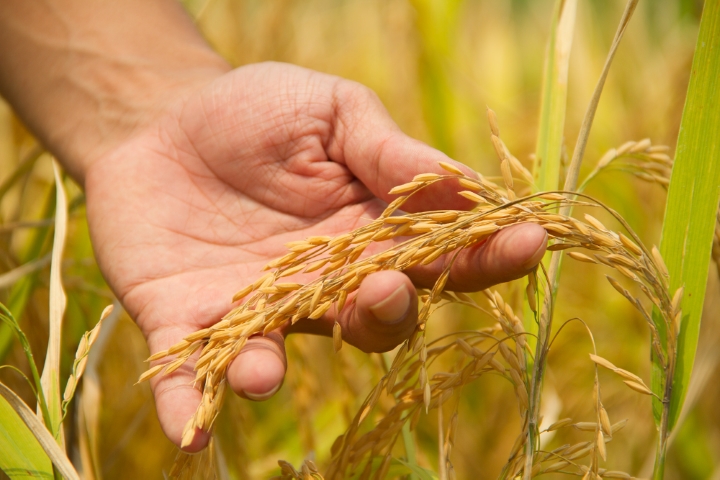 Australia as a leading global producer of rice

Australia is not a huge global producer of rice, growing between 54,000 to 1.7 million tons at its production peak. However, it is a high value crop that has global demand and captures a price premium because of the pristine growing conditions, high quality and the Australian provenance story. Australian growers are also known globally for their high-water use efficiency with their cropping practices.

Rice growers in Australia are an innovative bunch and will not be held back from keeping as much control as they can within the supply chain. That is why SunRice was started in 1950, as the Ricegrowers’ Co-operative Ltd. In 2007, SunRice corporatised and then listed on the ASX last year. The dual class share structure is largely controlled by 600 growers who are A class shareholders and control the constitution of the company. Both A and B class shareholders benefit from the complete supply chain created by Sunrise.

SunRice does their own breeding at RRAPL, and over time has grown into a billion dollar company, selling over one million tons of rice around the world with rice mills in Australia, California, Vietnam, PNG and Jordan, and over 30 brands selling a variety of rice grown internationally to the worldwide consumer market.

On Laurie’s own property, it is evident that his first love is rice production, but he utilises the moisture in the soil after the rice crop harvest in May to direct drill canola, wheat or barley into the paddocks. “It is a good farming system, to be able to get a second crop off yearly,” Laurie says.

Grower involvement at the Board Level

Laurie is a passionate believer in grower control. After serving as president of the Ricegrowers’ Association of Australia, he was elected to the board of SunRice fourteen years ago. He has served as Chairman for the last five years. 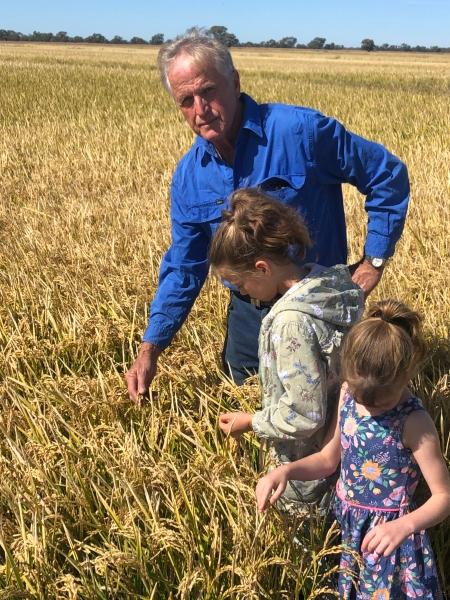 In 2000, Laurie visited the USA and saw the first 9750 John Deere rotary harvester with an 825-front working in Illinois. He recalls thinking that “it might be good to strip rice with.” So, on his return to Australia, he ordered one. Laurie started with the 9750 then traded to the John Deere 9860 harvester, and now has an S680 with all the technological options such as MyOperations™ and Combine Advisor™. Laurie has been doing yield mapping since 2000 and utilised variable rate mapping for his fertiliser. He appreciates the technology built into the John Deere machines.

Having just decided to buy a new 4WD tractor to replace his reliable but aging 4WD’s, he chose a John Deere 9520R scraper special. He looked across all the available tractors in the market and analysed all their benefits. The reason he chose John Deere was reliability. “John Deere have demonstrated that if there is an issue with a machine they will fix it, even if it means splitting a transmission, they will do it, at their cost, and they will stand behind that machine.”

Laurie is confident in Emmetts because of the shared knowledge between the service department. “Ten years ago, I was contract harvesting at Moree with my neighbour, Nick Lowing and his 9760 kept overheating, with ultimately a fire on top of the engine, even though he was blowing it down regularly with a Stihl blower. Nick is a skilled mechanic in his own right; but I convinced him to phone Emmetts and talk to Anton Elliott [who is now Emmetts Group Aftermarket Manager, having been a tech, and then service manager]. Anton immediately asked if he had been using a hand-held blower, and Nick confirmed he had. Anton explained that his radiator had been gradually plugging and with no air velocity across the engine, a fire can start. He told Nick to get out the air compressor and blow it out from the inside for an hour. Problem solved! Anton knew the machine, and he knew about 100 other machines working too, and was able to share the solution from what he had seen.”

Laurie is excited about technology. “Years ago, I used to go contract harvesting, and measuring acres was often problematic with magnetic counters. I invested in early GIS and GPS technology. I was able to tell the customers exactly how many acres they had, as some would say ‘I need you to harvest that 1000-acre paddock.’ I would finish the job and say, ‘your paddock is 935 acres,’ and then I would charge them for their actual acreage. It was good because they did not know the exact paddock sizes, and I would only charge them for the accurate number of acres I harvested.”

“ArcView GIS allows the use of archival satellite imagery for farm planning and irrigation design, when we are renovating old layouts. It also allows us to use cut and fill maps and yield maps to create our own shape files for differential seeding. The technology has evolved and keeps getting better. This is the same for surveying, I first started out with a chain and optical square, to then using a laser level and total station. We have now bought reasonably priced RTK receivers to create terrain models that are loaded into Terramodel for whole-farm irrigation plans. We are now using an RTK drone for both surveying and crop monitoring.”

Having started his farming career with his brother Neil who has since sadly passed away, the second generation are all on board to continue the family tradition. Laurie and Deborah’s children are John, Andy and Lauren who, with their partners, are all farmers involved in rice production along with broadacre cropping and timber production. Laurie and Deborah have 8 grandchildren between the ages of two and eight and look forward to continuing with the business of food production.

The Emmetts Team wish the Arthur family well and thank them for sharing their story. 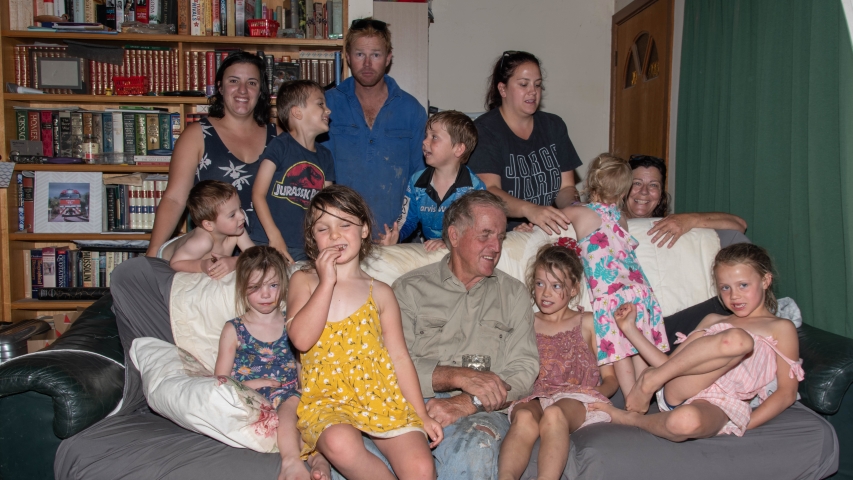 Photo: Laurie with his family